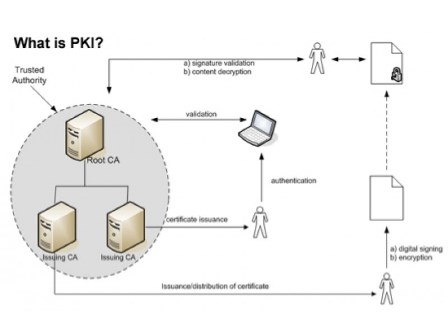 After several years working in the US, I have met more and more often sophisticated  PKI (Public Key Infrastructure), Time Stamping Authority or Digital Signature platforms  that do not adequately protect the master and private keys that are being used in  the generation of digital certificates or e-sign and encryption processes.

These organizations are not aware of the fact that they are exposing themselves to a series of risks which are totally unnecessary and avoidable with the use of cryptography-based robust systems  available in the security market and always demanding the maximum international certification in security.

Best practices makes it is mandatory and imperative the use of certified hardware cryptographic technology  in order to properly operate  reliable and robust platforms of digital signature, PKI and time stamping solutions and many others involving the use of KEYS. Failure to do so, the risk of becoming victims of cybercrime reaches very high levels; not only for the organization itself but also for all those who naively trusted use its services.
It is like playing “Russian roulette” with its own business of Certification Authority. After having made a very important investment in implementing PKI and digital signature infrastructures, many forget the most important element:  provide these solutions with the  robustness and security which are indispensable by using the key component,  the HSM or Hardware Security Module to safely store the master keys and securely generating all the private keys involved in the process.

Certification Authority and Time Stamping only with guarantees

As we all know, digital certificates are basically an electronic container with user identity private data (either physical or legal person) where the role or privileges are specified besides outlining applications for which the user is authorized (authentication, digital signature, code signature, encryption, etc.). And, of course, the owner public key signed by the Certification Authority.
Moreover, this digital certificate has a private key associated and is intimately linked to the certificate user ontology, be it either a person or an organization.
If the signer of the certificates (Certification Authority) does not protect the private key to its maximum with the one that is being signed, he is enabling the popping up of false certificates in the cloud issued by themselves. That is placing all the naive (holders and receivers) that have relied on this supposed “Authority” at risk.
Providing a single false digital certificate into circulation with the private key of a particular issuer, places under suspicion all the certificates he has issued, overruling them all and turning all the activity of the so-called “Authority” into sterile.
Exactly the same thing happens in the case of Time Stamping Authority. It is true that it builds a “service on demand”, but it is also true that a notary generating evidence to a third party is set. If such evidence is not 100% credible; if there is the least doubt about its reliability, which value of evidence has its seal against a third party?… Who ventures to believe that notary?
In conclusion, we can say that a PKI, a TSA or a VA must inevitably rely on a HSM, Hardware Security Module, to protect the private key used for signing. This private key is the base of those Service Providers, and not protecting it would mean the suicide of its activity.
And of course, to make this HSM, Hardware Security Module HSM, a reliable element, it must always be endorsed by the highest international secure certification.