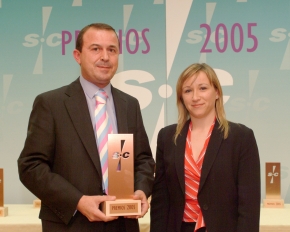 The SIC 2005 Awards recognize the work of REALSEC

On 27 April 2005, the magazine SIC through the second edition of its annual awards recognizing the work of companies and administrations with their activities and achievements contribute to the awareness and development of ICT security and for this reason, they gave one of these awards to REALSEC.
Our company was awarded for being the first Spanish manufacturer that received FIPS 140-2 Level 3 cryptographic plate in his Cryptosec PCI HSM (Hardware Security Module) and whose award received and thanked the Director General, Jesús Rodríguez Cabrero.
This second edition of the SIC prizes, coincident with the congress Securmática, was well received by professionals and representatives from companies and agencies of the ICT security sector
For more information about this second edition of the awards click this link: http://revistasic.com/premios/premios2005/index.htm