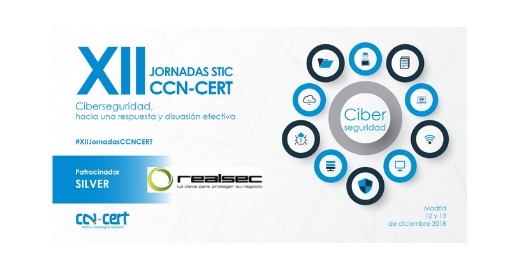 REALSEC reaffirms its commitment to cybersecurity, for seventh consecutive year, as a sponsor of the 12th Conference STIC CCN-CERT.
“Cybersecurity, through an answer and effective deterrence” is the theme chosen this year for the 12th Conference, organized by the National Cryptologic Center (CCN), a body attached to the National Intelligence Centre (CNI).
The opening ceremony of the 12th Conference STIC CCN-CERT, will be presided by His Majesty the King of Spain, December 12, 2018, at 9:00 h, in Kinépolis-Ciudad de la Imagen, where during 12th and 13th of December will gather more than 2,500 experts from both Spain and abroad.
REALSEC joins as a sponsor during the Conference and aims at contributing to the consolidation of the cybersecurity culture in our country.
It is worth highlighting among the novelties of this edition, the expansion of more rooms where lectures and round tables will be held on: threats, attacks and technological challenges; prevention on cybersecurity; national security scheme and the new legislation on data protection (RGPD); critical infrastructures and the NIS Directive. In the event, the “CCN Award” will also take place in recognition of the cybersecurity path.
REALSEC as a sponsor will be present in the Conference in Sala Lumière, with an exhibition space presenting our products and security solutions.
You can find more information about the 12th Conference STIC CCN-CER here.