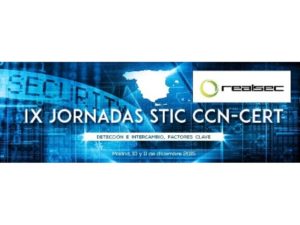 As a technological company of encryption and digital signature solutions, REALSEC reinforces its commitment and responsibility for the cybersecurity world, as a sponsor of this Conference for the 4th consecutive year.

Madrid, December 2, 2015.-. REALSEC, Spanish manufacturer of encryption and digital signature technology, participates as a sponsor, one more year, in the Conference STIC, that CCN CERT will hold in the Kinepolis Auditorium (Ciudad de la Imagen, Madrid) next 10-11 December.
This IX edition of the Conference, whose content is included under the heading “Detection and Exchange, Key Factors”, sets up a leader meeting and reference in our country for the cybersecurity sector professionals. Besides carrying out an important role in raising awareness in this field aimed at the entire social ecosystem: public administration, companies, professionals and citizens, and all of this setting within the Cybersecurity National Strategy
The IX Conference STIC, which in its VI edition (first in which REALSEC collaborated as a sponsor) had an attendance of around 500 participants, is expecting an attendance of more than 1100 participants, among professionals linked to the cybersecurity of the Spanish Public Administration scene (national, regional and local) as well as other business-related and other critical infrastructures.
It is through the STIC Conferences where CCN-CERT achieves an important work in favour of the Spanish cybersecurity through the union and sharing of knowledge of the different agents involved (institutions, businesses and citizens). These have turned out in being more proactive against potential cyberthreats; to know, first hand, the  quickest and the most effective responses to cyberattacks; to have the keys to minimize the risks of the APTs in cyberspace and be better prepared to deal with the threats and the blots of cybercrime.
“As a company committed to the world of cybersecurity, REALSEC wants to be present in the STIC CCN-CERT Conference one more year, thus supporting the work of CCN in this area, which has made this  Conference be set as the annual key meeting point for practitioners of cybersecurity in our country” says Jesús Rodríguez, CEO, REALSEC. “From REALSEC, we continue supporting the development of this Conference, which year after year are gaining audience, due to the quality of its training content, promotion in the joining forces in the fight against cyberattacks and proactivity in the detection and prevention of potential cyber-risks”.
As a sponsor, REALSEC attends this event to seal its commitment to cybersecurity and to announce its encryption cryptographic and digital signature solutions for Public Administration, Banks and Companies in general.
These Conference will deal with contents related to cyberespionage, APTs and other types of threats; as well as on the ENS Cybersecurity Strategy. All will be completed with practical workshops.
For more information about this Conference, click HERE (In Spanish)

Security VS Cybersecurity, key asset for everybody.

Today, an important part of the National Security Strategy focuses on cybersecurity, an area in which companies have an obligation to contribute, aligned to the strategies of the State Bodies, since the cyberspace security is vital for confidence, development and survival of any country.
Entities such as CCN-CERT are consolidating as a clear example of success of the cybersecurity management through its involvement in the improvement of the safety and security of ICT systems and the Critical Infrastructures.
Hence, since almost a decade, the Spanish Governmental CERT is the host of this Conference STIC, year after year, reinforcing its leadership in terms of management and improvement of cybersecurity, promoting awareness and cooperation of different agents of the sector and with a 20% increase of participation each year.
{:}